Azure – You can now deploy Cloud Shell in new regions

As you may know, Azure Cloud Shell, a browser-accessible shell environment allowing you to run Bash or PowerShell commands/scripts using your browser, has been available for quite some time now.

Well, until today, there was only a limited number of region available for creating the Cloud Shell storage account used.

Good news, more regions are now available and if you already have enabled/configured Cloud Shell you can also take advantage of these new regions if you need.

You can now choose between the following region to host your Cloud Shell storage account: 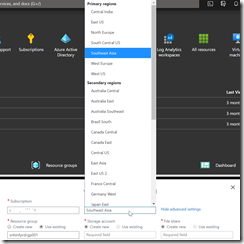 If you already have Cloud Shell configured, you can dismount your existing storage account and then launch again Cloud Shell to select the new region you want

To dismount your storage, you can use either the below PowerShell or Bash commands

Azure – You can now enable backup directly from the File blade