As you may know, a new service called Universal Print has been released in preview allowing you replacing your on-premises print servers (see https://t.co/gOagPc8slW).

Well, you can now deploy the printers used by with Universal Print using Intune/Endpoint Configuration Manager to your devices.

Off course, the first thing to do is to implement and configure Universal Print (see the above link).

Then, you need to download the Universal Print provisioning tool from here https://aka.ms/UPIntuneTool_DL

As you can understand based on the description, the most important ones are the UniversalPrintPrinterProvisioning and SamplePolicy.

Then you can customize the printers.csv file to list your Universal Print printers.

If you have multiple printers, you can define which one will be the default one.

Then you need to download the Win32 app management prep tool from https://go.microsoft.com/fwlink/?linkid=2065730 to generate the custom Win32 app package to be deployed.

As reminder, to use the prep tool you need save the files (InstallPolicy.cmd and printers.csv)to be included in the package in a single folder – let’s say c:\temp\universalprint for the purpose of this post and then use the command line to generate the package

With my example, this becomes 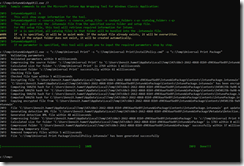 Now you can deploy both package UniversalPrintPrinterProvisioning.0.1.0.0.intunewin and the printer(s) package.

Connect to your Intune/Endpoint Configuration Manager portal (https://endpoint.microsoft.com/) and go to the Apps\All apps blade to deploy in order: 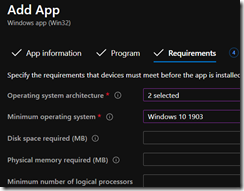 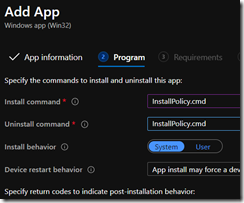 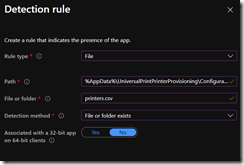 How it is working?

The first package (UniversalPrintPrinterProvisioning) is deploying a background service on the targeted Windows 10 devices. This service will then look for user logon event to deploy the printer package.