I have a SCCM lab environment for testing, I decided to destroy it and rebuild it from the ground up as I have not done this for some time now and It’s a good refresher.

When I build anything, I always add an AD group rather than a user for access to any ‘Full Administrator’ roles. This prevents you from locking yourself out. Unfortunately for me after I installed SCCM and opened it for the first time and just began customising it in reverse. Instead of setting up the administrative roles and access I decided to start creating applications till I figured out how I wanted to structure the rest of the site servers.

After a week or so I wanted to clean up some of the user accounts in Active Directory. I ended up deleting the user account I originally used to setup SCCM. Fast forward a couple of days, I tried to open the SCCM console with a domain admin user and I got an error, no access. Then it clicked, I forgot to add the domain admins group to the SCCM administrators. The only ‘Full administrator’ account in SCCM was the user that I deleted.

After trying to troubleshoot with various AD restore tools and hours of unsuccessful attempts to restore the deleted user account, I thought if I can access the SQL DB and add another user or group in there, I would be able to gain access. 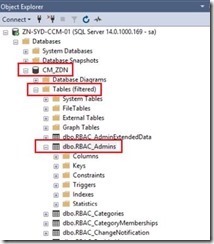 The account shown above is the old HEX value for the deleted AD account I originally used to configure SCCM which no longer exists.

Now you can add a group to ‘Full Administrators’ in the SCCM console.

Just remember to remove the original user that was created, as the SID and username will not match in SCCM.